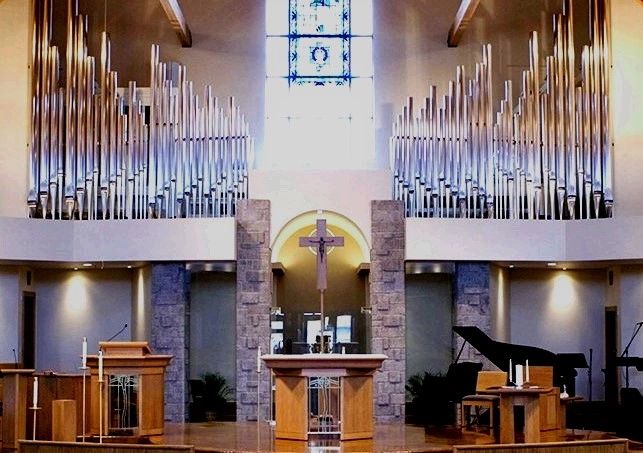 The Fond du Lac Area Organists’ Association was formed several years after John Penkoske, former longtime organist at St. Paul’s Cathedral (Episcopal) had begun giving organ recitals over the noon hour several times during summer months. He invited other area organists to join him, and by the summer of 2009, the Summer Noon Organ Recital Series became an annual fixture in Fond du Lac area churches. Featuring primarily local organists, the recitals include distinguished guest organists as well. We are so grateful to John for founding this special opportunity for the community and for his dedication to its continuation and growth. At present, administration of the Recital Series is handled principally by Kris Bartelt - First Presbyterian Church, Ken Hill – Hope Lutheran Church, and Pam Lane – Church of Our Saviour.

A scholarship program was begun in 2015 to offer organ lesson scholarships to piano students with an interest in learning to play the organ. These students also perform on the recital series. Instructed by Mrs. Georgene Antos, our current organ scholars are Connor Koch and Jill Soldner.

The Summer Noon Organ Recitals occur in area churches on Thursdays, from 12:15 -12:45 pm. The complete Recital Series schedule is formulated in spring and is announced as soon as possible thereafter. Concerts are presented free of charge. A free will offering is taken for the continuation of summer organ recitals and for scholarships to encourage young people to become part of a new generation of organists.

Kenneth Hill has been Minister of Music at Hope Lutheran Church in Fond du Lac for the past 24 years. He started playing the organ for church services when he was 17, and earned bachelor and master degrees from Concordia University, Chicago, and a Masters in Church Music from Concordia University, Wisconsin. His responsibilities at Hope include directing choirs, brass ensemble, handbell choir, worship teams, and serving as parish organist. He and his wife, Marie, have three children: John, Elizabeth, and Melissa.

Organist David Heller has risen to prominence as an outstanding performer and pedagogue in the United States. The American Organist has described him as “an eloquent performer,” and his playing as “an excellent demonstration of outstanding music making.” A native of Fond du Lac, Dr. Heller holds degrees from Lawrence University and the Eastman School of Music, which awarded him the prestigious Performer’s Certificate in Organ. His t teachers have included Miriam Clapp Duncan and Russell Saunders in organ, and Colin Tilney and Lisa Goode Crawford in harpsichord. His post-doctoral study was with David Craighead in organ, and improvisation with Gerre Hancock As an active recitalist, David Heller has performed extensively throughout the United States and Europe, South Korea, and Taiwan. Dr. Heller serves as a lecturer and performer for the Classical Music Festival - Eisenstadt Summer Academy each summer in Eisenstadt, Austria. He has appeared as both performer and presenter at national and regional conventions of the National Association of Pastoral Musicians, the Organ Historical Society, the American Institute of Organ Builders, and the American Guild of Organists. As author of the highly acclaimed book, Manual on Hymn Playing (G.I.A. Publications), he is frequently sought as a lecturer and clinician in the areas of church music skills and hymn playing. He is currently at work on a book documenting the history of the pipe organ in San Antonio, a collaboration that was begun with the late John Ballard. He has five recordings to his credit on the Calcante, Pro Organo, and Raven labels featuring some of the most distinctive instruments in the country. He has been featured frequently on Michael Barone’s Pipedreams on National Public Radio.

Since 1986, David Heller has been a member of the faculty at Trinity University in San Antonio, Texas serving as Professor of Music and University Organist. His primary teaching responsibilities in the Department of Music are in the areas of organ and harpsichord performance and literature, church music skills, and music theory. In 2010, Dr. Heller received the Distinguished Achievement Award for Creative Work from Trinity University, one of the school’s top honors awarded to the faculty. He was appointed Chair of the Department of Music in 2012.

David Hein is instructor of music at Alverno College in Milwaukee, where he directs the choir and teaches music courses in the Music Therapy Program. He is also the principal organist at The United Methodist Church of Whitefish Bay. David has choral arrangements published with Neil A. Kjos Music, Inc., and Choristers Guild; and has been a contributor to conferences and workshops for the Association of Lutheran Church Musicians. He earned a Bachelor of Music degree at St. Olaf College and masters of music-choral conducting from Michigan State University.

Wendy Pelletier was born in Fond du Lac and began playing the piano at age 5,

with instruction from her grandmother, Evelyn Pelletier. Her first formal piano teacher was Mildred Galow. While attending Saint Mary’s Grade School, she was taught organ lessons on the church organ at age 10, by Sister Rita Rumschlag, and first played professionally for a wedding at age 12. Before graduating from Goodrich High School, Wendy studied with Delores Brandt. After graduating from UW-Platteville with a Bachelor of Science degree in Music Education—Vocal Comprehensive with Piano Emphasis, Wendy taught Elementary Music in the Anchorage, Alaska School District for five years. Staying on the west coast, but moving further south, she spent the next seven years in San Diego, California playing the organ for weddings, and piano at several major hotels and Sea World. Since moving back to Fond du Lac in 1997, Wendy taught Music at Sabish and Theisen Middle Schools. Since 2002, Ms. Pelletier is currently the Vocal and General Music teacher 3K-8, at Shepherd of the Hills Catholic School, Eden. From 1998-2001, Wendy was the organist at Presentation Parish, North Fond du Lac. Since 2001 and 2003, she’s been employed as organist and choir director at Sons of Zebedee Parish—St. John, Byron and St. James, Oakfield. In 2013, St. Mary, Lomira was added to her mass schedule. In 2019, Wendy also began playing for the weekly school mass at Shepherd of the Hills. Currently, she chooses the music, types, emails, and prints copies for choir members, schedules cantors, rehearses with the choir, and plays/cantors for four masses weekly. For her first performance in the Fond du Lac Organ Recital Series, in August, 2019, Wendy performed a piano/organ duet with Fr. Tom Lijewski—Meditation by Thais.

INSTRUMENTS ON THE RECITAL

Check here for news and updates as they come from the Fond du Lac Area Organists!